Films for 6/7: Black Angel (#BNoirDetour) and The Man Who Knew Too Much (#HitchGoesHollywood)

(And both films include performances by Peter Lorre!)

First, it’s 1946’s Black Angel, in which noir bad boy Dan Duryea plays a more complex role than those he’s best known for, as ne’er-do-well songwriter Martin Blair. When Blair is accused of the murder of a blackmailer, his wife (June Vincent) tries to prove him innocent. The plot is relatively simple but there are lots of little surprises along the way, and an engaging romance.

The noir recipe is handled well with our focus on a down-and-out protagonist up against a seemingly unbeatable dark force. And when you toss in Peter Lorre as a sinister club owner and Broderick Crawford as a wiseguy police inspector, you wonder why this film isn’t better known!

The icing on this tasty noir cake, however, is watching Duryea play piano. The man can jam! 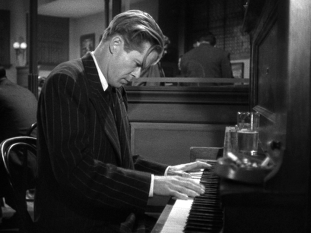 Next, #HitchGoesHollywood presents The Man Who Knew Too Much.

As we continue to follow Alfred Hitchcock’s evolution from British filmmaker to Hollywood giant via a monthly live-tweet of the cinematic milestones of his early career, we find ourselves ready to view a film chock full of firsts.  The selection for the next edition of #HitchGoesHollywood is The Man Who Knew Too Much (1934). 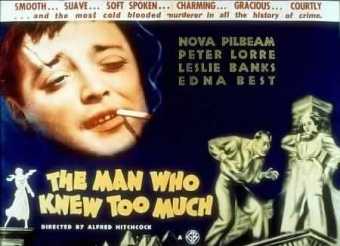 “A man and his wife receive a clue to an imminent assassination attempt, only to learn that their daughter has been kidnapped to keep them quiet.” – IMDB

Hitchcock’s run with British International had ended in 1933.  He was busying himself directing a film called Waltzes From Vienna– and he wasn’t happy at all.  When Hitch’s heart wasn’t in a project, he was quick to adopt, what we would call today, the “No Fucks Given” mantra.  Legend has it that, during a lavishly staged musical set piece, Hitch was visited by the new head of the Gaumont British Picture Corporation, Michael Balcon.  The studio mogul was surprised to find Hitch fast asleep in the director’s chair while a full ensemble waltzed.  Balcon shook Hitchcock awake and took him to lunch.  Hitch explained how he loathed working on productions like Waltzes and that he would be happy to just make suspense movies.  By the end of the day, Balcon had Hitch under contract and granted his wish.

The Hitchcock-Gaumont partnership would usher in the Golden Age of Hitch’s British films.  Over the next six years, he directed The Man Who Knew Too Much, The 39 Steps, Sabotage, Secret Agent, Young and Innocent, and The Lady Vanishes.  A successful partnership was built that helped usher Hitchcock to Hollywood.  As an aside, an incarnation of the original Gaumont still exists and produces Bryan Fuller’s wonderfully tasty take of Hannibal.

As for being chock full of firsts, The Man Who Knew Too Much was Hitch’s first picture with Gaumont, the first English language film for the talented Peter Lorre, the first Hitchcock picture with entirely no musical score, and, most importantly, the first introduction of the famous Hitchcockian plot device, the MacGuffin.

Our Hitchcock blonde for this production is Edna Best playing the part of Jill Lawrence.

Keep your eyes peeled for the quick Hitchcock cameo around the 33 minute mark.

Be sure to stick around after #BNoirDetour on June 7th and catch the film that Hitchcock claims to be “the picture that re-established my creative prestige.”

I’ll be waiting for you.

2 thoughts on “Films for 6/7: Black Angel (#BNoirDetour) and The Man Who Knew Too Much (#HitchGoesHollywood)”