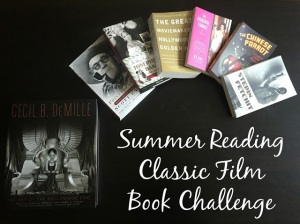 I’m always up for a challenge, and Out of the Past is offering a good one. Though my schedule is getting busier, I’m nonetheless signing up for the 2015 Reading Classic Film Book Challenge. You can read all about it here. It began on June 1 and runs until September 1, so I have my work cut out for me. But I adore film criticism, especially from a cultural studies perspective and as it addresses gender, sexuality, race, ethnicity, and class. Because this is a noir blog, the books will all be noir crit.

Book 1: Driven to Darkness: Jewish Émigré Directors and the Rise of Film Noir by Vincent Brook (Rutgers 2009). [Because I read this as an eBook without page numbers, I will cite all quotations and paraphrase by location.]

Brooks’ study of the Western European origins, style, and themes of film noir emphasizes the role of émigré directors, specifically Jews fleeing Nazi Germany and ending up (some with a detour in France) in Hollywood. Most broadly, his argument is historical/auteurist. He argues that similar backgrounds created a style and focus that is identifiable as German-Jewish. These cultural outsiders became insiders in the liberal/modernist Weimar period and created expressionist theater and film. Then, with the rise of Nazism, the truth and depth of their outsider status was reaffirmed to lethal effect, leading many directors to flee Germany, seeking to continue their art and lives in safety.

Whether they arrived pre-Hitler or post-war, these Jewish émigrés faced enormous losses, including personal, familial, and cultural. Moreover, arrival in Hollywood pitted them against the primarily Eastern European moguls. The latter were more businessmen than artists, and had never experienced the kind of creative or financial success of the German Jews, however brief the Weimar period was. The émigré directors were part of the 1% of Germany’s Jews, and came to Hollywood in small numbers, from generally culturally and economically privileged experience. The moguls, by contrast, for the most part emerged from poverty, working their way up from peddler to business owner to Hollywood producer, creating their film wonderland on the west coast to achieve success in this popular, low-class business pursuit while Edison controlled the east.

This background adds ethnic and historical nuance to an understanding of the clash of perspective that created what we call film noir. Many studies of noir emphasize art vs. commerce in Hollywood, but Brooks adds useful and engaging focus on the western vs. eastern European cultural clash for Jews.

His broader contribution is discussion of how elements of German Expressionism made their way into American film through these émigré directors, and how the themes and style of noir reflect a particularly German-Jewish sensibility. He argues that “the impact of their ethno-religious identification on their work has remained almost wholly unexplored” (Introduction, Loc. 30). While I have not read widely enough to verify this claim, I can say that I have never seen this issue explored so fully.

Secondly, he posits that the noir aesthetic “bore a strong Jewish trace” (Loc. 52). Though Jews did not invent German Expressionism, for example, its theatrical and film incarnations were governed by the “pioneering efforts” of Jewish producers, directors, writers, cinematographers, and set designers (Loc. 52). Even the impact of French poetic realism on Hollywood film noir came through Jewish refugee directors with experience in French studios (e.g. Siodmak, Wilder, Bernhardt, Ophuls).

Such details lead Brooks to conclude that both the “bleak worldview and stark exposure of society’s underbelly” and  “the deep psychological and moral ambivalence of the noir universe” relate directly to the German-Jewish experience (Loc. 73).

There are certainly limits to the book and Brooks’ approach. Debate over whether Lang should be considered Jewish or not is mostly ignored in the book (he was raised Catholic), for example. And the auteurist approach identifies directors as isolated artists, creating their films without what we know to be ample input by numerous individuals, from producers to actors and from cinematographers to set designers.

This said, I find the book clearly written and engaging, a useful historical study and critical guide to approaching noir with attention to its German-Jewish contributions, particularly historical and religio-ethnic facets.