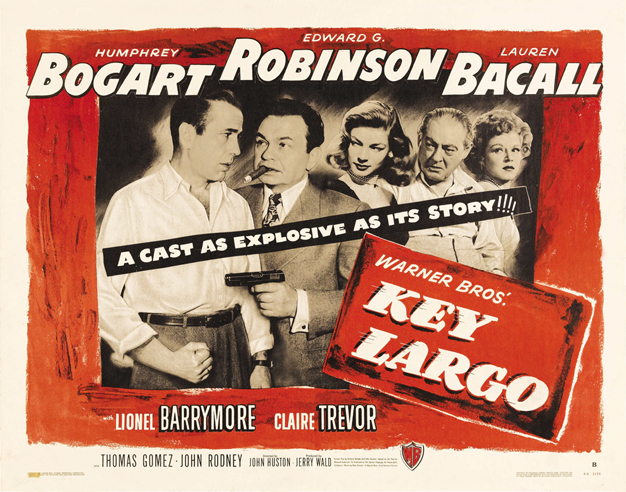 I’m becoming quite a fan of participating in blogathons. I can’t resist a good challenge, and addressing specific prompts with a focus solely on film noir often provides an irresistible dare. This post is for In The Good Old Days of Classic Hollywood‘s Barrymore Trilogy Blogathon, paying tribute to performances by John, Ethel, and/or Lionel Barrymore.

Were this not a noir blog, I’d likely be writing about Dinner at Eight, featuring both Lionel and John Barrymore. Specifically, I find John’s portrayal of an aging alcoholic actor a compelling comment on Hollywood appearance norms, his own life, and the demands of masculinity in 20th-century America.

But this is a noir blog, so I’ll be discussing Lionel Barrymore’s portrayal of James Temple in Key Largo.

I’ve already written about Key Largo once this summer, a study of the setting and storm for Slver Screenings and Speakeasy ‘s Beach Party Blogathon. (If interested, you can read the post here.)

I read the Temples, James (Barrymore) and daughter-in-law Nora (Lauren Bacall), as the film’s moral compass. Nora Temple represents the young post-war generation, coping with disillusionment and loss, but holding out some hope for the future. Wheelchair-bound James Temple, by contrast, is a s 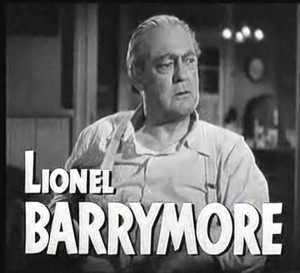 ymbol of a fading past, holding strong against all odds to truth, justice, and the American way.

With the Temples as a sort of Greek chorus — and with gangster Johnny Rocco (Edward G. Robinson) as a foil exemplifying corruption and cultural ruin — central character Frank McCloud (Humphrey Bogart) must make his way and decide where he stands.

Nora is young, strong, and Frank’s love interest. As with many positive, domestic female characters in noir, Nora supports Frank, letting him lead the way toward their future…or away. (In keeping with her independent but relatively passive role, it is not Nora but Claire Trevor’s has-been torch singer Gaye Dawn who sneaks Frank a gun at a vital moment.)

James Temple serves as Frank’s ultimate role model in Key Largo, as I interpret the film. Despite his age and frailty, he speaks his mind in support of those he cares about (Nora and the local Seminole population) and against all that he feels is wrong in the world (exemplified by Johnny Rocco). Here are a few of his most powerful moments:

When confronting one of Rocco’s thugs pointing a gun at him, Nora, and Frank, we hear him speak off-screen: “I’m not afraid of you. Go ahead and shoot. You haven’t got the nerve. Scum!” And as Johnny Rocco enters the room, he tells the thug, “That big gun in your hand makes you look grown-up, you think! I’ll bet you spend hours posing in front of a mirror holding it — trying to look tough! […] You scum!”

Soon after, he gives his opinion on big time criminal Rocco, who has snuck back into the country: “You shouldn’t have been deported. You should’ve been exterminated!”  And he concludes, “You filth! You city filth!”

In the same scene, after Frank discusses the goals of WWII to rid the world of “ancient evils,” James links Rocco with such evil: “We rid ourselves of your kind once and for all! You ain’t comin’ back!” And when Rocco taunts him for his weakness, James continues to call him “Filth!” as he rises from his wheelchair and takes a swing at him. Though he misses and Rocco laughs, we can’t help but admire James Temple for his bravery in the face of danger. Frank immediately comes to help him back to the chair and Nora comes forward to beat on Robinson’s chest and claw his face.

Perhaps his most compelling speech, however, is the prayer he utters against the increasingly sadistic Rocco after he has first attempted to scare him by telling him about the hundreds of people who were killed in a similar storm only two miles away:

“Make a big wave. Send it crashing down on us. Destroy us all if need be, but punish him. Hear me…hear me…”

Frank is the one who rises when Rocco responds “I’ll kill you!” and aims his gun at James. Only the fact that he is out of bullets stops Rocco from killing Frank instead, jamming the gun into his stomach and pulling the trigger twice.

This is the moment we see Rocco lose his confidence, the prayer also a catalyst for a change in Frank. As I read the scene, it is James’ strength of will that turns the tide (if you will) of the film.

Though only the terrific Claire Trevor was nominated for (and won) an Academy Award for her performance in Key Largo, Lionel Barrymore undoubtedly created one of his most memorable and poignant characters in the film.