Film for 9/20: Behind Locked Doors 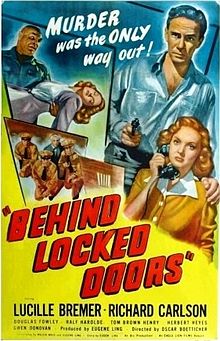 What do you get when you combine the actor who’ll play the (human) lead in Creature from the Black Lagoon, the actress who played eldest sister Rose in Meet Me in St. Louis, and uncredited but fabulously B performances as mental institution patients by Tor Johnson and recently deceased but cherished Dickie Moore?

When plucky reporter Kathy Lawrence (Lucille Bremer) discovers that a well-known judge and fugitive from justice is hiding out in a private sanitarium, she asks broke but skilled private eye Ross Stewart (Richard Carlson) to pretend to be mad, get committed to the institution, and investigate.

Many dangers arise and troubling misuses of power loom the longer Ross stays captive, looking for the judge. There are his abused bunkmates, the guard who does the abusing, a kindly older guard who can’t control his coworker, the scheming head doctor, and a quietly troubled young man with a secret (Dickie Moore).

Above all, there is the dangerous, caged mountain of a man, known only as “The Champ” (Tor Johnson).

With a contrived B plot and so many well-known B actors, why would you even think of missing this week’s #BNoirDetour?