Movie Classics and The Vintage Cameo came up with the excellent idea of honoring Frank Sinatra’s Centennial with a Blogathon. For many fans, past and present, Sinatra deserves the commemoration and appreciation. For a noir blog, though, there are major limits to tribute options. And for me, this is all complicated by my not much liking Sinatra’s singing, acting, or persona.

Before I get to the film on which this post will focus, I do want to share my affection for a short end-of-war propaganda film made to oppose antisemitism. Sinatra plays himself, teaching a bunch of kids a lesson about patriotism as he stops them from bullying a Jewish boy. He sings a song that shares its title with the film, “The House I Live In,” about how the United States is a family and we must live together in peace and harmony, across differences. The difference is religion and not race or other aspects of identity or culture, made obvious by the fact that the kids are all white and the only reference to race is a line by Sinatra about bombing those “Japs.”

The song, by contrast, does address race, including a line about appreciating one’s neighbors, “black and white.” But that line and its verse were removed from the film. The composer (music and lyrics) is Abel Meeropol (a.k.a. Lewis Allen), a Jewish American teacher and socialist activist. He’s also the writer of “Strange Fruit,” a song about lynching made famous by Billie Holliday. Meeropol’s sons (the children of Julius and Ethel Rosenberg that he adopted after their parents were given the death penalty for treason) state that when Meeropol went to see the film and found the verse missing, he leapt up from his seat shouting “Shit, shit! They ruined it! They ruined my song!” and was escorted from the theater.

“The House I Live In” received an Honorary Academy Award and a special Golden Globe in 1946. In 2007, it was selected for preservation in the US National Film Registry. Sinatra was proud of his participation, and he sang the song repeatedly over his career. (Patti LaBelle did an amazing rendition for Sinatra’s 80th birthday celebration.)

But enough with anecdotes. Let’s get to the noir.

The single noir film in which Frank Sinatra starred is 1954’s Suddenly. He plays a sociopathic assassin, leader of a small team hired to kill the President as a train carries him through a small town called Suddenly. The film is a tense ride, with Sinatra facing off against Sterling Hayden as the honorable sheriff, and terrorizing a family when he takes over their little house on the hill to set up his weapons. Nancy Gates plays a widowed mother, grown cynical since her husband was killed in WWII. James Gleason is her proud and wily father, and Kim Charney plays her spunky son “Pidge.” (It is amazing Sinatra doesn’t just shoot the mouthy boy about halfway through the film, though he does threaten.) 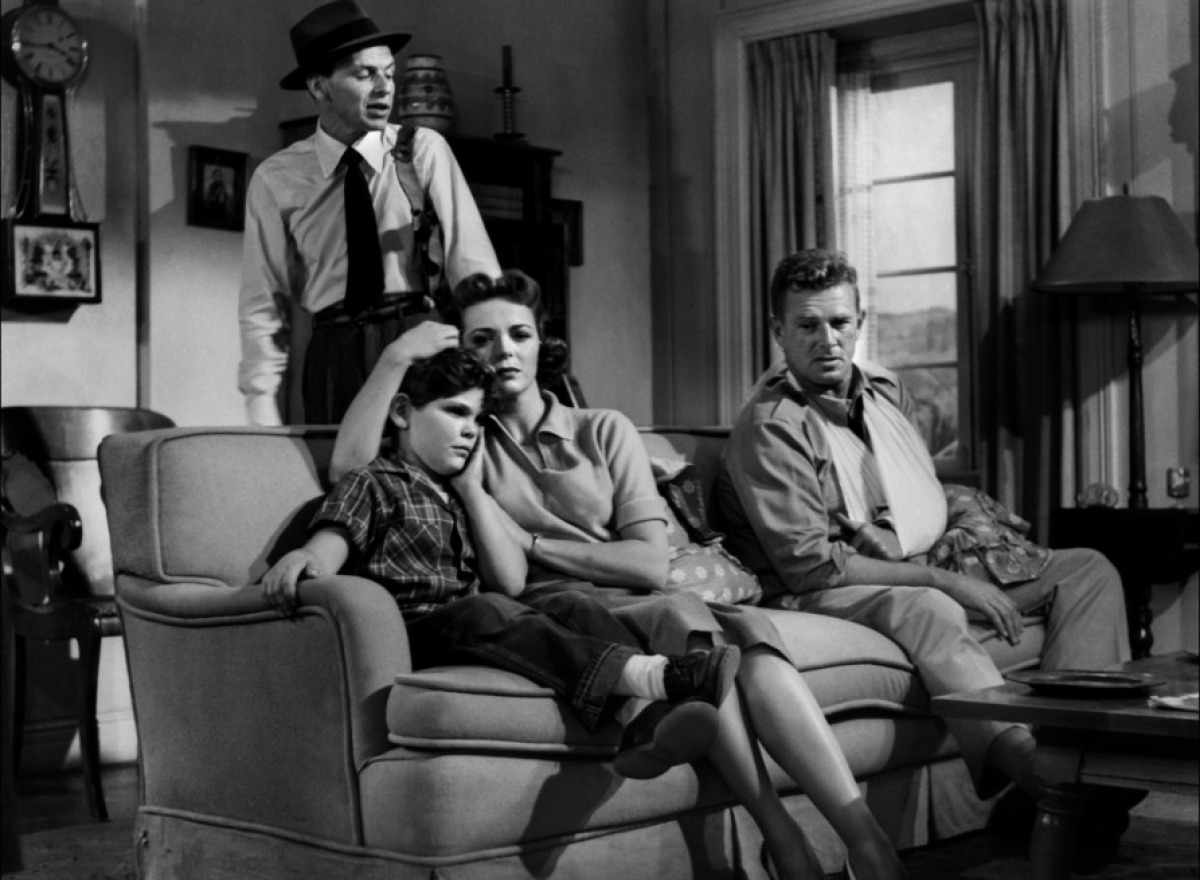 The film was directed by Lewis Allen–but not the one who wrote “The House I Live In.” After Suddenly, Allen directed A Bullet for Joey, Edward G. Robinson’s last noir, also featuring George Raft. But mostly, he is a director known for television work, from westerns including The Rifleman and Bonanza to Perry Mason and Mission: Impossible.

What makes the film memorable, especially for Sinatra fans, is the actor’s intensity. The character is a mess, and Sinatra brings him to life. He lies about his war experience, brags about his ruthlessness, and gives a crazy glare that even Richard Widmark would applaud.

So, though I cannot say I’m a “fan,” I do respect Sinatra’s performance in Suddenly, a post-war noir that lets Old Blue Eyes play the other side of the patriotic coin, and play it well.