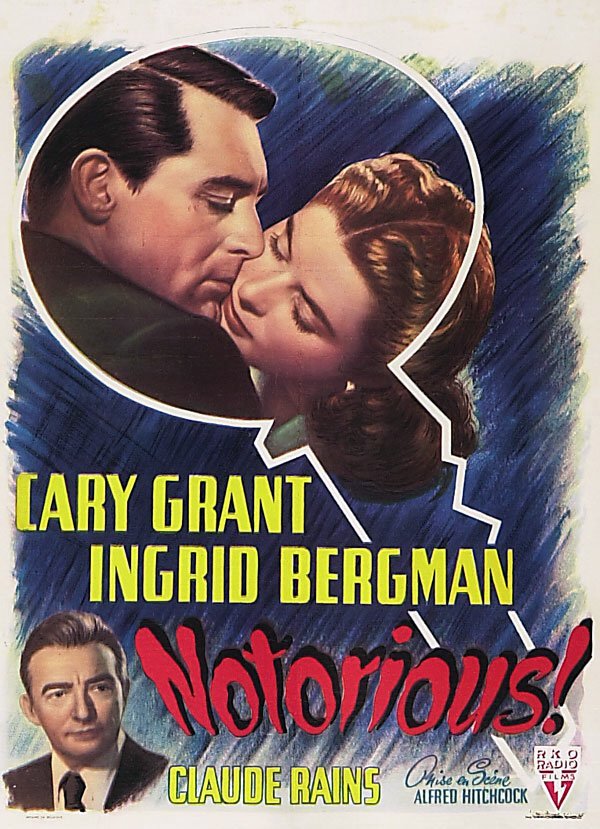 Sunday, February 7, 2016 brings an important media event to our screens. No, it’s not the Super Bowl; it’s the return of Hitchcock to #BNoirDetour in two classic noiresque features! 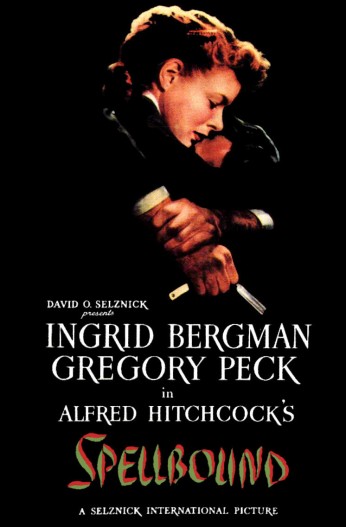 Because of his distinctive auteur signature, Hitchcock films are rarely discussed as film noir. Most, nonetheless, rely on identifiable noir style and themes. Psychological suspense, life-threatening danger and violence beneath the surface of middle-class life, and issues of trust and mistrust are among his central concerns. Unexpected angles, unique perspectives, and purposeful work with light and shadow dominate his cinematography.

Hitchcock’s Hollywood films also feature significant performances by members of the Hollywood elite. Notorious (1946) and Spellbound (1945) both star Ingrid Bergman, an actress who brings a rare and powerful combination of elegance and earthiness to her work. Her acting is rich with its hint of foreign intrigue and quiet, riveting emotion.

Both also share Claude Rains in a supporting role [ETA: no they don’t, oops], while the leading men are equally celebrated for their tall, dark and handsome appeal: Cary Grant and Gregory Peck.

Both features are penned by Ben Hecht, who wrote stories and scripts for many films noir, including Kiss of Death, Whirlpool, and Where the Sidewalk Ends.

To my mind, the most painful similarity between these films is the reliance on sexism to establish character and tension. Bergman’s characters in both films are mislabeled by men who rely on virgin/whore dichotomies as their means of understanding women, both in the text (the characters) and in the production context (the script and especially the director). The women must take enormous personal risks to prove themselves “worthy,” meaning they can be more than limiting labels imply. In Notorious, Bergman’s Alicia Huberman is the party-girl daughter of a traitor who must show herself worthy of a “real” man’s love, even if it kills her. In Spellbound, Dr. Constance Petersen is the frigid career woman who must suffer for a love that overwhelms and might ruin or destroy her. 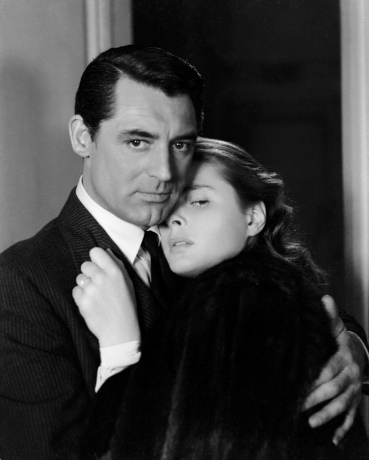 The leading men in these films do not live by the same imperatives. Grant’s Devlin in Notorious is arrogant and vicious; he shows little character development beyond having to rescue the very woman his misjudgment (and that of the other men who accept her offer) put into deadly peril. By contrast, Peck’s amnesiac J.B. is a more sympathetic figure, but Constance takes on all responsibility for his cure to prove herself as a therapist and a “woman.” In short, whether the male leads are sympathetic or not, they are not taxed with the requirement of justifying themselves to the degree the women are in Notorious and Spellbound.

On the other hand, we may argue that this means the female characters get the truly engaging, dynamic roles in these two films about gender relations. And that means we view the film through the eyes of the female character, in significant contrast to Rear Window and Vertigo, for example, in which the male gaze is in full force. Nonetheless, the suffering of James Stewart’s characters in Rear Window and Vertigo stems from a lack of control and power (impotent masculinity portrayed through disability), while Bergman’s characters suffering in Notorious and Spellbound results from the imposed judgments of men.

If you’ve had enough feminist critique, let me offer the final pitch for taying up late on a Sunday night: Spellbound features an Oscar-winning soundtrack by the amazing Miklós Rózsa. (I used  an excerpt from it for the BNoirDetour Welcome video.)

If these details have whetted your appetite sufficiently, please join the #BNoirDetour gang for a double-header sure to outshine the sport of men or puppies:

One thought on “#BNoirDetour for 2/7: Hitchcock Double Feature”