I am not a fan of Tarantino or his films. Arrogance is a trait his characters share with him, and he’s so self-consciously aiming at auteurist immortality with every genre bend, orgiastic lashing of ultraviolence, and heavy-handed intertextual reference that I groan aloud whenever I see the next trailer for his newest self-aggrandizement in film. This said, I finally watched and loved Inglourious Basterds. So I’m writing about why.

Tarantino is a film fan, especially of B genre pictures. Inglorious Basterds immersed me in a heady combination of the 1940s Hollywood war picture, film noir, and the spaghetti western. They all work well together, not surprisingly, as all are violent and intense. Plus, there are more than a few noir westerns and westerns with noir overtones — from Pursued (1948) and Winchester ’73 (1950) to Johnny Guitar (1954). And WWII is part of many a noir, either directly — as in Man Hunt (1941) or  Crossfire (1947) — or indirectly, through an atmosphere of wartime anxiety.

Beyond the blending of genres, Tarantino is an expert at the art of viewer invitation. He welcomes the audience into his picture through larger-than-life characters and situations. Will the widowed farmer father of three disclose the location of the Jewish family hidden beneath his floorboards in Nazi-occupied France? And, if so, will the well-spoken, milk-drinking Nazi who delights in the deaths of others pay for his evil crimes? Assuming he will, how will it happen — and can we watch?

The answer is always “Yes” to our desire to see everything. Tarantino knows we are voyeurs, as he is one himself. From crane shots to close-ups, the film delights in showing from a knowing position. We have a seemingly omniscient view and our director is omnipotent in choosing just how to show it to us, and make us aware he is doing so.

What we hear is just as important, and the film does a great job of indulging in linguistic foreplay. If the French farmer and the Nazi officer are kind enough to speak English, they tell us they will be doing so first, and language is used as a way of keeping from the hidden Jews the fact of their imminent slaughter. And language can be a great source of humor, too, though it is sometimes not quite as funny as it thinks (e.g. Raine’s Italian accent).

Then there are those perfect moments when cinematography and dialogue come together so well you applaud or laugh. In Tarantino’s case, they break the fourth wall so he can announce his film’s excellence through Brad Pitt’s mouth: 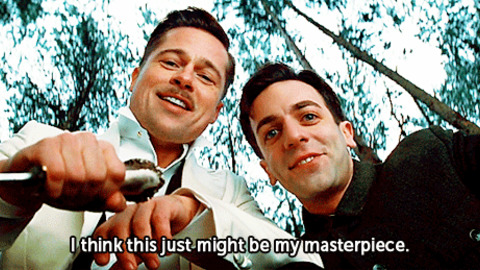 For me, the truth is that a big chunk of the excellence was in convincing a reticent Jewish viewer who studies the Holocaust and didn’t like Kill Bill (that’s me) to rally ’round. I did. I wanted to see WWII end differently. I did crave the revenge. And if I turned my head away once or twice at the odd baseball bat bashing or strangulation, it was only briefly. Hell, even the commanding Southern white boy liked Jews. How could I not cheer on the basterds?

This is not to say the film does not have its weaknesses. As a noir blogger, I found the noir in the film weak and sexist. I get that the film’s two primary female characters can be read as twists on the femme fatale, but they were heroes, and the film punishes them excessively and graphically.

Not only is Nazi movie star and double agent Bridget von Hammersmark (Diane Kruger) killed, but she is violently strangled by sadistic Col. Hans Landa (Christoph Waltz). There is a belabored sexualized intensity in his method of dispatching her; nothing and no one else brings out this feral response. And Emmanuelle/Shoshana (Melanie Laurent) suffers doubled pain in having to commit murder and then being shot to death when she goes over to her victim, who still seems to be alive. Such exaggerated suffering is a fate reserved for the women in Inglourious Basterds. Even Hitler and Goering are just blown away by machine guns.

In the end, as I said in the beginning of this little personal odyssey, I enjoyed this film, much more than I thought I would. I’m not sure whether this says more about me or Tarantino. I’ll try to answer this soon by watching Pulp Fiction and Django Unchained.