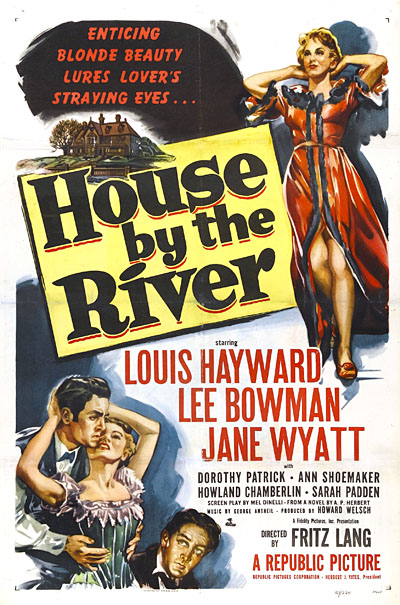 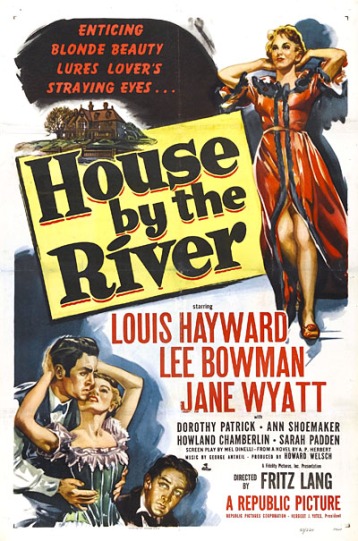 Yesterday afternoon and evening (before and after #BNoirDetour), I treated myself to viewings of two very different noir films that share a focus in title and concept on a particular house: Robert Wise’s House on Telegraph Hill (1951) and Fritz Lang’s House by the River (1950).

Such a focus in noirish thrillers isn’t original to these films, of course. There’s The Red House (1947) and Rebecca (1940), to name just two early examples. In fact, House on Telegraph Hill shares with Rebecca the connecting of the house with a hidden past as well as a little outbuilding where dirty deeds occurred.

The films are unique in their ways, however, and worthy of attention from film lovers. I’m going to try to make it interesting through a comparison to determine my favorite. Yes, it’s time to bring on the B Noir Detour face-off!

An overview with ample spoilers but I don’t give away the endings:

HoTH: Polish woman Victoria Kowelska (Valentina Cortese) survives a Nazi concentration camp though her best friend in camp, Karin Dernakova, does not. Both women lost their husbands, but Karin’s wealthy American aunt took in her son, Christopher, to keep him safe. Victoria is determined to survive, and so she takes her dead friend’s papers and eventually comes to America where the aunt has died but Alan (Richard Basehart), Karin’s cousin-by-marriage, falls in love with and marries her. With the help of devoted but stern governess Margaret (Fay Baker), they live happily together in the House on Telegraph Hill, until Victoria begins to suspect Alan may have murdered Karin’s aunt and have the same intention for her…

HbtR: In this gothic thriller, Stephen Byrne (Louis Hayward) is a frustrated writer who has used up much of his (and his generous, handicapped brother John’s) inheritance to avoid working. His wife Marjorie (Jane Wyatt) sees his faults but loves and supports him, as does his brother (Lee Bowman). One day when his wife is visiting friends in the country, Stephen cannot resist his baser impulses and makes a hard pass at their new maid Emily (Dorothy Patrick)  that turns unintentionally lethal (he chokes her to keep the neighbor from hearing her cry out). When John happens to come for a visit, Stephen begs for his help, and the two decide to put her in a sack and throw her into the river. When the body bobs up a few weeks later, both Stephen and especially John fall under suspicion, for John loathes what they have done and shows signs of guilt at every turn. Stephen, by contrast, blossoms under the attention of the local public, becoming more popular as an author than ever before and daring to pen a “real” story, his masterpiece, “The House by the River.” John can be easily dispatched to ensure he does not tell the truth, for others will assume it was a suicide. But when Marjorie finds the manuscript, however, and learns the truth from it, can Stephen allow her to live?

HoTH: This is the only noir I’ve ever seen that has as its protagonist a woman who survived Bergen-Belsen concentration camp. The film’s depiction of the camp is superficial, the women too healthy-looking, etc. However, there is a lovely moment as Alan’s friend Marc (William Lundigan) — who just happens to be the Major to whom Victoria first presented herself as Karin — declares that anything one did to survive after liberation from the camps is understandable.

HbtR: A spoiled, selfish child of a Victorian husband, a devoted wife, and a weak but loving brother. Been there, seen that.

HoTH: There’s a bit of a muddle as the film must balance Victoria’s against Alan’s lies. Many a film has carried off the avaricious husband who needs his wife (and sometimes others) to die so he can have it all. Popping an innocent child into the middle of things as well as a governess adds complication, though not gripping originality.

HbtR: A pretty straightforward tale of selfish villainy, though the idea that Stephen wants fame rather than fortune is creative if not tension-building. 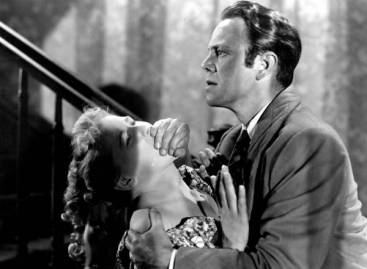 HoTH: Basehart plays Alan as so nice you know he must be evil, especially because his friend Marc doesn’t like him and we’re reminded of this often. When he finally shows his true colors, he’s a plausible villain, though more Agatha Christie than Hitchcock.

HbtR: Hayward chews the scenery with evil in this, but I must say his slimy grin as he makes others miserable is magnificent. That he has a British accent when others don’t is weird and offputting at times, but it doesn’t ruin the character. In fact, in one scene he berates his wife, admits to adultery, and then stalks off and slams his door with such casual cruelty you want to applaud…and then shoot him. 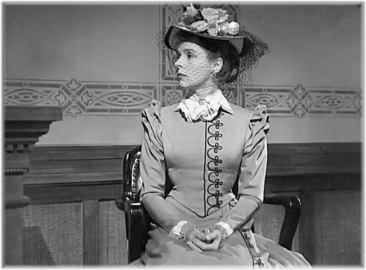 HoTH: I’ve only seen Valentina Cortese in one film before this, Terry Gilliam’s The Adventures of Baron Munchausen (1988), and she was delightful as Queen Ariadne. This far earlier role is far more demanding, and I did enjoy her acting. [Note to self, see her as truck driver’s mistress in Jules Dassin’s Thieves’ Highway (1949).] That Cortese has an Italian accent that everyone takes for Polish is a mite annoying, but having one nationality substitute for another was/is so common in Hollywood you have to just sigh and move on (hello, Ingrid Bergman). She handled her complex emotions well enough, from determination and guilt to loving warmth, gaiety, and stark terror. I confess she didn’t have the kind of charisma that could hold me spellbound (see what I did there?), but I did enjoy the performance.

HbtR: Gotta confess it, I’m not a Jane Wyatt fan and I’ve no idea how she ended up cast in this role. She’s plucky at best, dull often, and the role doesn’t give her much to do. It’s the kind of part often given to Gene Tierney, where she’d just look fabulous and pout. Meh.

HoTH: Supporting male William Lundigan as Marc was very secondary, but quite likeable. Supporting female Fay Baker made the most of the little she had as the governess who may or may not be in cahoots with Alan. The child (Gordon Gebert), was far too chipper given the major changes in his life, too well-adapted and well-behaved for my taste, typical of children as background characters in dramatic films.

HbtR: As in HoTH, the second male lead (Lee Bowman) was acceptable but not wildly compelling. The role required far more emotional depth than Marc in HoTH, but I can’t say Bowman proved up to the task. Far more delightful were neighbor Mrs. Ambrose (Ann Shoemaker), John’s housekeeper Flora (Jody Gilbert), and Howland Chamberlain as a toothpick sucking, slimy-voiced district attorney. Just a more colorful cast all around.

HoTH: Robert Wise handled this thriller well enough, but it’s no Born to Kill (1947) or The Day the Earth Stood Still (1951). I didn’t feel a director’s hand much, and there’s more twisty plot than formally established mood.

HbtR: Fritz Lang had far less to work with than did Wise, and I feel he did more with what he had. Much work to enliven bit parts and make the ensemble memorable. Quirky choices for his villain are the highlight of the film.

HoTH: Lucien Ballard is best known for his work with Peckinpah, and I couldn’t argue he’d found his stride by 1951. No particularly interesting choices, but certainly not incompetent.

HbtR: Like (or along with) the direction, the cinematography is nicely noir. Edward Cronjager is listed as “director of photography,” but I suspect he was strongly guided by Lang. Some good work with shadows and especially with night scenes, from the dark hall of the house to the moon shimmering on the (obviously fake) river.

HoTH: I remember Sol Kaplan’s work best from a couple of episodes of Star Trek. He also wrote the music for Rawhide (1951), the same year HotH came out. The music has a Hitchcock feel to it, with driving beats and doses of romantic violins alternated with loud horns to startle us. It’s ok.

HbtR: I studied George Antheil back in a college course on 20th-century composers, and I’ll never forget his wild innovation in such conceptual pieces as Ballet Mechanique, which was never performed in his lifetime because it’s only more recently that we can actually sync up a dozen player pianos. As for the film, the music is moody and heavy-handed, but memorable. It gets more excited at certain moments than we do, however, and thus calls attention to itself in unnecessary and occasionally irritating ways.

Winner: Tie (because neither did much for me)

The House (as Setting and Thematic Element) 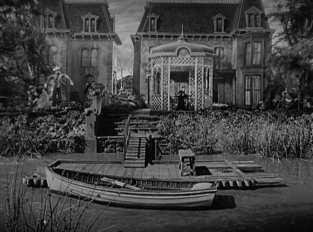 HoTH: The house is played to echo Rebecca‘s Manderley, and that just doesn’t work. It is a house in which evil has been done, but it’s also been the safe place for a boy to have escaped the Nazis and for a woman to give love to that boy as a substitute for his mother. Once we learn murder has been committed there — and may be again — it loses its shine, but even as Victoria leaves, she casts a loving glance upon the photo of the ill-fated aunt whom Victoria hopes will ultimately approve of her choices. Maybe the novel used the house more consistently.

HbtR: Even more than HoTH, the house is identified as central to the text but emerges as far less so. Yes, like HoTH it is a site where a murder occurred and where more may happen. But there is nothing particular about the house that we focus on, apart from its proximity to a nosy neighbor (who never finds out a thing) and the river it sits beside, where things keep floating up as the tide shifts. Wait. Do rivers have tides?

Winner: HoTH, but not by much

As you can see, each film had its strengths and weaknesses and the winner, House by the River, is by a single point and largely due to Lang’s direction. When I think about these two films together, I think of the complexity of Victoria in HotH and the sleazy evil of Stephen in HbtR. I thought I liked the former better than the latter after viewing, but once I compared them in detail, the content of HotH, while richer, could not overtake the style of HbtR as a noir.

In the end, I’m left wondering how much better a noir House on Telegraph Hill might have been with Lang directing it.