What I Watched for the Holidays

Did I watch some on a plane?

Did family time make me insane?

Did I watch and expect less?

Were some a fun and joyous mess?

Closest to noir of anything I watched was this Joseph Losey film, made in France and in French while he was in exile after being blacklisted years earlier. I paid $30+ for a copy of the out-of-print DVD via eBay because I’ve long wanted to see it and couldn’t find it any other way. The package arrived while I was out of town, and It stars Alain Delon in a compelling performance as an art dealer in 1943 Vichy France, making money off of French Jews forced to sell art to get the gold needed to escape Nazi-controlled Paris. A tale of persecution and identity with notes of Kafka and noir, I enjoyed this unique picture tremendously, from its self-absorbed, obsessive protagonist to its depiction of the Vel’ d’Hiv Roundup of 1942 (the Nazi-directed raid, mass arrest, and deportation to Germany of Jews in Paris by the French police). HIGHLY RECOMMENDED.

Saw this right before leaving town, and found it great fun. If you like Key and Peele, the movie is for you. If you don’t? What’s wrong with you! The world’s cutest kitten is the motivation for nerdy middle-class Clarence (Keegan-Michael Key) and his loser cousin Rell (Jordan Peele) to take on drug dealers and murderers, including Cheddar (Method Man) and his crew and the evilest of sociopaths Smoke and Oil Dresden (also played by Key and Peele). What can I say? It was hilarious. And touching in that Clarence is obsessed with the “soulful” music of George Michael and even persuades hardened gang members to love him, too…as long as they think he’s fatherless and black. RECOMMENDED. 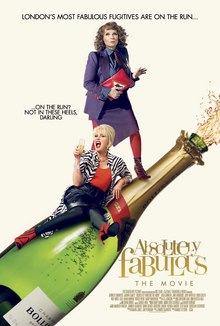 Reviews panned this big-screen update to the television series, and fuck them. I watched this on the plane out of town to see family, and I loved it. From Patsy swigging from a bottle of Chanel 5 when she runs out of champagne to Bo (Mo Gaffney) announcing that Edina’s ex Marshall (Christopher Ryan) is transitioning to female, it was an utter delight. Every character we know and love makes an appearance, including Bubble (Jane Horrocks) with her absurd outfits and cunning inanity and June Whitfield as tennis-playing Mum, plus all the magazine staffers and PR competition. And Lulu, too, of course. A zany flight from arrest makes up most of the action, and though it’s predictable and we’ve seen most of it before (even Lumley as her male alter-ego “Pat”), it’s just awesome to see everyone again, exactly as they always were — along with a teen daughter for Saffy, the product of her Marrakesh affair. RECOMMENDED.

I finally saw this film on the return flight, dissuaded from seeing it in the theater by the misogynistic backlash that had me thinking it would be dull and derivative. I’m so angry I didn’t see it in the theater now. Even if bad it would have shown my feminist solidarity to a tokenistic and superficial but meaningful way in these times. But it was wonderful. Every character is loveable, the jokes are funny, the homage is wonderful, guest appearances are sweet, and the new elements are just fantastic. The female cast works well together, and Kate McKinnon was a revelation to me. I’d never seen her before, and she was brilliant. She reminded me a touch of Lori Petty in Tank Girl, a performance even more underrated and panned for sexist reasons (the next film Dark Horse made after this flopped was the “hit” Barb Wire — nuff said). HIGHLY RECOMMENDED.

With 2016 so full of hideous politics and too many celebrity deaths, I gloried in ending the year with such wonderful entertainment.Happy New Year to all, and may 2017 be far better than it has any right to be.

4 thoughts on “What I Watched for the Holidays”