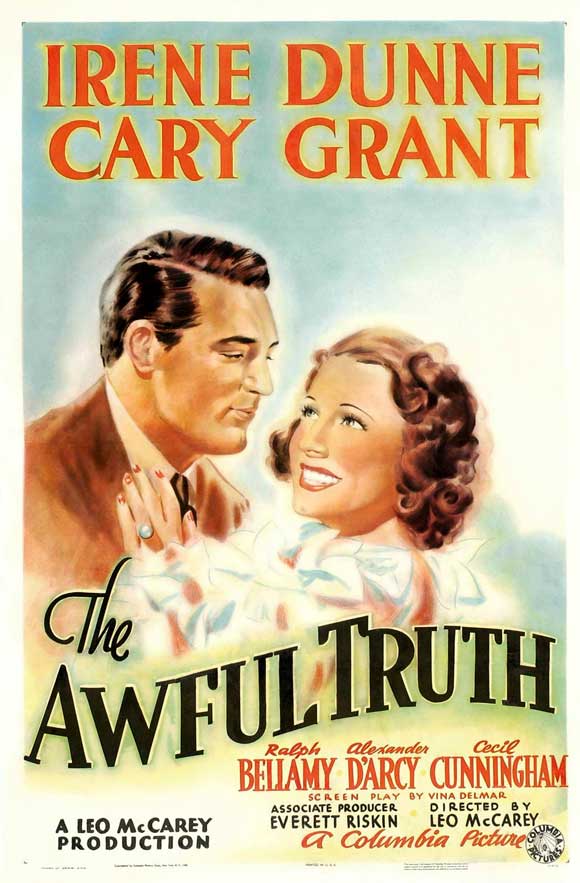 In addition to noir, I love screwball comedy. In both Hollywood genres, gender roles are under scrutiny, “proper” behavior and appearance are questioned, and the issue of trust between the sexes is central. I could say more about the history and political trajectories of noir and/vs. screwball, but it’s all just an excuse to compare two films that got me thinking about what makes for good romantic comedy.

Twitter’s @sbliss89 hosts a wonderful weekly livetweet of light Hollywood ’30s and ’40s fare under the hashtag #warbonds on Wednesdays at 7pm ET. This week, he hosted Day-time Wife (Ratoff, 1939), a screwball comedy starring Tyrone Power and a 16-year-old (!) Linda Darnell. I’d never seen the film, and it’s unlikely I’ll seek it out to watch again. I saw a few superficial similarities to the earlier classic screwball hit The Awful Truth (McCarey, 1937), featuring Cary Grant and Irene Dunne. And this made me want to compare the two — especially as regards gender roles — to figure out why one film is so much more fun than the other. 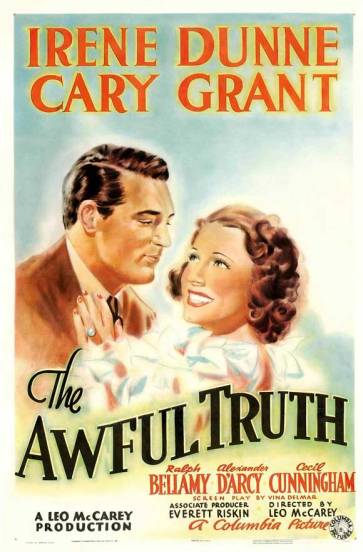 Day-time Wife is the story of a young married couple in which the husband (Tyrone Power as Ken) finds himself superficially enamored of his secretary (Wendy Barrie as Kitty), despite the fact that he is married to a lovely and loving wife (Linda Darnell as Jane). When Jane fears she is losing Ken, she doesn’t crumple but instead goes on the offensive, becoming a secretary herself to figure out the appeal. She pretends she is single and goes to work for a lecherous (also married) business man (Warren William as Bernard Dexter). As with all screwball comedies, things eventually get chaotic and and Ken gets his comeuppance, as they meet up on a cheating double-date, with Jane accompanying Bernard and Kitty with Ken. Of course, eventually all ends well, with the couple “starting over” and Ken recognizing his true love for Jane and Jane forgiving but not forgetting. Typical of the era is that Ken can’t sleep with Kitty if we are to be ultimately sympathetic with their marriage, so all we see is some kissing.

The Awful Truth is also the story of a couple where trust is lost and each turns the tables on the other to get even before a final reunion. More specifically, the film is an excellent example of the comedy of remarriage subgenre, in which temporary separation/divorce allows a more liberal display of philandering because it is not technically cheating. And the couple always remarries. Husband Jerry (Cary Grant) lies about taking a trip to Florida (we see him getting a rushed tan in a salon) and wife Lucy is caught having spent the night with her vocal teacher when their car breaks down. Jerry’s lie and Lucy’s apparent lie (which turns out to be the truth) break the back of their long marriage and they decide to divorce. After some dating and the engagement of each to another (unsuitable) partner, Lucy takes the reins and scares off Jerry’s paramour and the two reunite and live, we gather, happily and feistily ever after.

These two examples, however, do differ in small but significant ways, particularly in terms of gender roles:

In The Awful Truth, Jerry and Lucy are obviously quite wealthy; neither one seems to need to work to make money. This privilege allows for greater gender equality in their relationship. One reason Jerry is preferable for Lucy than Daniel (Ralph Bellamy) is his traditionalism, which will keep her in the home with her mother-in-law and out of the city with its access to modern living and independence.

By contrast, in Day-time Wife, Ken is definitely the breadwinner, and Jane is happy to quit the job she took only to get even and return to being a full-time, dependent housewife (with requisite black maid). Secretary Kitty is shown to be a gold-digger, and Jane is directly contrasted: Jane wants fur coats, but only from her loving husband, not an adulterous boss.

Nonetheless, the actual question of deceit is addressed in the latter film and not the former. Jerry never has to admit he was either actually having an affair (when not in Florida) or doing something else behind Lucy’s back. Lucy, by contrast, never cheats or lies. Lucy just embarrasses him and gets him into trouble as payback. Jane does this to Ken as well when she pretends to flirt — or more — with Bernard, but the subject of his “flirtation” is addressed more openly. While Ken mostly pouts (romantic comedy is not Tyrone Power’s strong suit), he does own his bad behavior.

In the end, I suppose the real difference between the two films is that The Awful Truth is damned funny while Day-time Wife just isn’t. This is surely about script and direction as well as Irene Dunne’s acting chops vs. Linda Darnell’s undeveloped abilities (that will shine so brightly in her later roles, especially in noir). And though Tyrone Power is a handsome fella, he came across as more whiny than wiley. I’ll take Cary Grant, thanks.