My Road to The Grand Illusion 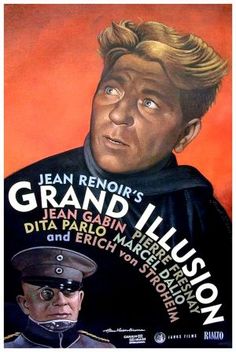 Rather than a review of Jean Renoir’s La Grande Illusion (1937) — examples of which you can read all over the internet and in books on Renoir, French film, war films, and the like — I want to write a bit about what led me to the film and why I enjoyed it despite not being a fan of war films, not being thrilled with the (necessary) structure of the film, and not understanding critical adoration of the film beyond its critique of war. This is not to say that I don’t share the film’s critique of war and how it reduces complex, individual people (men) to “enemies.” Renoir depicts his characters with affection and nuance, relatively speaking, and I suspect the film will stay in my mind and heart longer than I’d have predicted at first.

For an example of the gushing praise for the film, A. O. Scott, writing in 2012 for the New York Times reminds us that “by enduring consensus,” La Grande Illusion is “one of the greatest films ever made.” He mentions that while Goebbels was not a fan, Mussolini was. Moreover, FDR declared that “all the democracies in the world must see this film,” which Scott says is “still sound advice.” No democracy, “old or new,” states Scott, “is so secure as to be immune to the lessons of Jean Renoir’s great and piercing antiwar comedy.”

Of praise heaped upon the film, I find most persuasive acknowledgments of its rendering of all soldiers and even citizens as “prisoners of war” and Jay Winter’s argument that the film operates through “indirection,” artfully and intentionally showing the impact of war without depicting war itself.

Perhaps it’s because I study Holocaust literature, mostly survivor narratives, that I find The Grand Illusion engaging but less than life-changing. Perhaps I’m taking for granted an antiwar perspective that was rarely found in film in or before 1937. And perhaps I’ve seen too few war films to opine at all. But this is ultimately not what I want to address in any case. Suffice it to say that I very much like the film, I could watch it again (with perhaps some fast-forwarding in places), and the director and two of its players brought me to it.

I’ve recently written about my fondness for La Chienne (1931), and I also recently watched the 1928 silent La petite marchande d’allumettes (The Little Match Girl), fascinatingly starring the endearing young woman who was Renoir’s artist father’s last model and his son the director’s first wife, Catherine Hessling. Many other of Renoir’s works are on my list for future screening, especially the noirish ones, from A Woman on the Beach (1947) — only because I haven’t gotten around to purchasing it — to the earlier La Bête Humaine (1938), starring Jean Gabin, about whom you’ll read more soon. 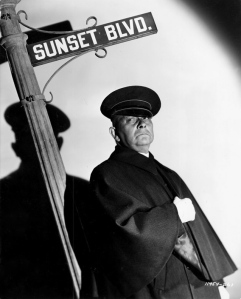 As I sought out more Renoir to enjoy, I came to La Grande Illusion because of two actors: Erich von Stroheim and Jean Gabin. My first encounter with von Stroheim was in my early 20s, if I recall correctly, when I watched Sunset Boulevard (1950) for the first time. I mostly enjoyed the character of Max because I saw the film after enjoying the Carol Burnett spoof. Von Stroheim is endearing in his determination to keep the diva’s rose-colored worldview in tact, to keep the present from encroaching on the past.

More recently, I re-encountered von Stroheim was in The Great Flammarion (1945), and this B noir led me to see his limitations writ large. I enjoyed the film and his character, but his delivery was far from persuasive. I realize this may be a matter of language and script, but I wasn’t hunting for more of his English-language films to watch anytime soon.

I became acquainted with the work of Jean Gabin quite accidentally, hunting for films on YouTube to show for BNoirDetour features on Sunday evenings when I came across Moontide (1942). It was a strange combination of romance, drama, and noir ambiance set on a river, costarring a very young Ida Lupino. I sought it out mostly for its seeming uniqueness against the ubiquity of urban noir and its hard-boiled dicks, femmes fatales, maniacs, and murderers. There’s a lovely gentleness to the film, despite its darkness, and I was determined after seeing it to watch more of this French actor I’d never seen or heard of. 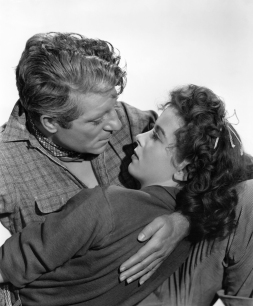 This led me, as a noir fan, to Touchez Pas au Grisbi (1954), which roughly translates to “Hands Off My Loot.” Gabin is amazing as an aging gangster who faces the limits of his willingness and ability to keep up his traditional lifestyle. I adore the film with all its debauched sexism as well as its statements about friendship and greed. I’ve dozens more Gabin films to watch, and I look forward to them all, especially La Bête Humaine. (I only hope I don’t find out Gabin was a womanizer or the like. I’ve avoided his biography so far so I can enjoy his acting.)

Both Gabin and von Stroheim are wonderful in La Grande Illusion, I must say. Gabin is his usual combination of intensity rendered as affability, a strong man faced with challenged that show his vulnerability. I wonder if he plays anything else, but I wouldn’t mind if he didn’t. (Certainly it would seem to describe Jean ValJean, whom he plays in Les Miserables (1958).) Von Stroheim, by contrast, regained my affection and respect in his portrayal of Captain von Rauffenstein. Or maybe it’s just the writing. What a wonderful character.

In short, I enjoy films most when they are part of an exploration into various individuals, styles, eras, or works, and La Grande Illusion came to me that way, as an exploration of three men whose work I wanted to see more of. And happily, I got more than I expected.

5 thoughts on “My Road to The Grand Illusion”