How to Enjoy Curse of the Cat People 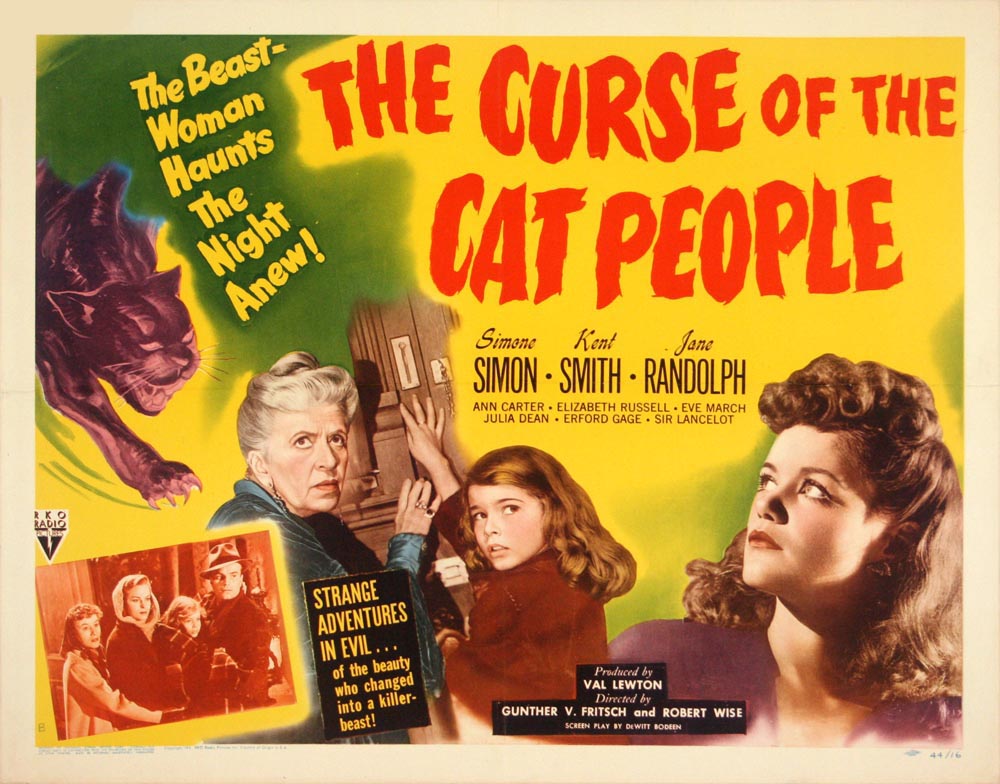 I’m not a fan of Cat People (Tourneur/Lewton, 1942). I value it historically and appreciate it within the context of B noir-horror. But I don’t particularly enjoy watching it. So, I postponed watching the sequel, Curse of the Cat People (Wise/Lewton, 1944) far longer than I should have. I bought a four-film Lewton DVD from TCM that featured both Cat pictures plus as I Walked with a Zombie (Tourneur/Lewton, 1943) and The Body Snatcher (Wise/Lewton, 1945). But for some reason I didn’t watch Curse. Then, last week, I saw it was showing on TCM and decided the time was right. I even got to livetweet with a small but devoted group on Twitter via #TCMParty.

What a fool I was not to have watched it the moment I got the DVD! I love everything about the film, from cinematography and direction to plot, character, and themes. Even aspects of setting included to amplify the absurd horror element were great fun. And the minute hubs got home from work, I pulled out the DVD and we watched it together, just hours after I’d seen it once. Just as marvelous the second time, and I even teared up a little at the end the second time through. #ImNotCryingYoureCrying

Now, rather than just wax poetic, I’ve decided to give you my step-by-step guide to how best to enjoy the film if you haven’t seen it. This can also be used as a guide to the film for the experienced with emphasis on my favorite aspects — as well as the most annoying.

Like the original Cat People, Curse of the Cat People is far better described as noir or noir-horror than horror. This is a tale of a young, imaginative girl’s loneliness and the ghost (or whatever) who comes into being to comfort her, also finding comfort herself thereby. It’s also a tale of adult fears and PTSD. Just ignore the unrepresentative publicity posters:

If you want to be able to stomach the representation of family life, particularly the behavior of the father figure, it’s best to know what he went through in falling in love with a woman who may or may not have turned into a panther and killed a man before letting a panther loose at the zoo to promptly kill her. The film will tell you the rest, and even show you pictures of Simone Simon’s cat person Irena before you meet her in the sequel.

Ann Carter is absolutely adorable. Big blue eyes and a face full of expression. Her story is heart-melting, and so is her performance.

I also delighted in the film’s one character of color, Edward, the family servant who cooks, cleans, and babysits while the parents enjoy hobbies and…whatever. Fans will recognize Sir Lancelot by his singing voice, used well in I Walked with a Zombie.

4. DELIGHT IN THE NOIR CINEMATOGRAPHY

Despite cheap sets, the film is gorgeously lit and filmed, making the most of links between form and content, image and action. Just enjoy the ride, provided by Nicholas Musuraca, who also served as director of photography for noir pictures Out of the Past, Where Danger Lives, Clash by Night, The Blue Gardenia,  and The Hitch-hiker.

In addition to the main plot about little Amy and her friendship with the ghost of her father’s dead wife Irena, there is a subplot about Amy visiting an old dark house in which lives old Mrs. Farren (played by Julia Dean, whom noir fans may recognize from a small part in Nightmare Alley). Mrs. Farren has a form of dementia, leading her to fawn on little Amy while she denies that the woman who cares for her is actually her adult daughter, Barbara (Elizabeth Russell). That Amy is six and Mrs. Farren says Barbara died when she was six links the two, as does Barbara’s growing hatred for Amy and the attention she gets from her otherwise cold, sharp-tongued mother.

For me, the theme of alienation and fear runs through both plots, particularly the desperate fear of being lied to, of living by illusion. The scene in which Barbara almost kills Amy is heavy-handed in both plot and cinematography, yet it speaks to the film’s central themes effectively. And when Barbara dissolves into Irena before Amy’s eyes, we see the two actresses look quite alike. (Plus, the scene keeps up the superficial horror mise-en-scene.

Watching the mother character remain passive throughout the film can be painful for the enlightened twenty-first century viewer. This is particularly so when dad is an ass, which is most of the film. Particularly awful is when he decides that Amy is lying about her ghostly friend and takes her upstairs for “punishment” (aka her first spanking). Even though mother and Amy’s teacher Miss Callahan (Eve March) have told Ollie to chill out, he hasn’t, and neither step in to interfere with the man of the house hitting a six year old. (Interesting is that the film shows them disappear upstairs, but we hear no smack or cry.)

We can have some sympathy when we read Ollie through symptoms of PTSD, but the film doesn’t allow or encourage it, and mom Alice is hell-bent on remaining optimistic and chipper in every scene. Even Miss Callahan, who pays a visit as the spanking takes place, spouts to mom the era’s attitude that hitting a child is inevitable and no big deal.

Later, however, Miss Callahan gets alone with Ollie and carefully but firmly tells him what’s what. She suggests that Amy is lonely and her “imaginary” friend will go away if she has real friends. She advises dad to be that friend. And even after Ollie suggests that she, a childless spinster (ok, he doesn’t use that word) can’t know about parenting, she comes back with that an experienced teacher has helped raise many children. Give that woman a slow clap!

While little can fully save the film from celebrating a nauseatingly normalized white middle-class family in the end, not all is happily ever after:

Just writing this has made me enjoy the film all over again. I predict it’ll remain high on my list of favorite films for some time to come.

6 thoughts on “How to Enjoy Curse of the Cat People”