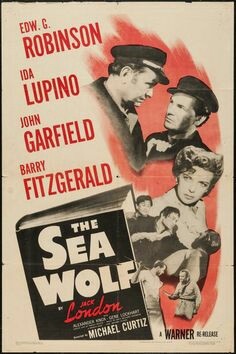 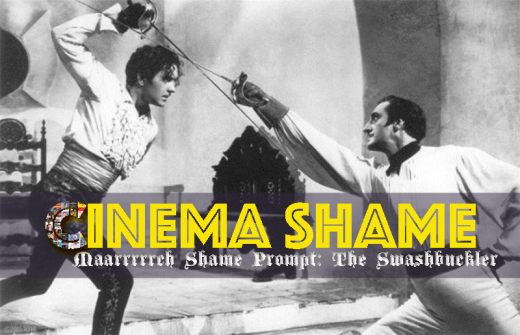 Although the banner lists “swashbuckler,” the Cinema Shame March (or Maarrrghh) post identifies the pirate as another legitimate focus for their monthly prompt. I did despair of finding anything to write about for this noir blog on the subject, but then I read a review of The Sea Wolf  (1941) over at Journeys in Lightness and Dark, and I rekindled blogging hope. Then I watched the film with the #BNoirDetour Detourettes last Sunday, and I realized the film was right for the cinema and long on shame.

If you like your pirates over the top — and I do (Captain Jack) — look no further than Edward G. Robinson as the sadistic and savage Captain “Wolf” Larsen, a figure as crooked as Johnny Rocco (Key Largo) and twice as crude. The actor is well cast in this dark sea adventure based on the Jack London novel and directed by Michael Curtiz, a kind of shipboard noir that also features other noir heavy-hitters, including Ida Lupino (as a criminal woman on the run) and John Garfield (as a criminal in the crew).To this, add Gene Lockhart in a moving turn as the ship’s drunk doctor and a young Alexander Knox as a stand-in for Jack London himself. This strange stew is stirred up and finally flavored with a hefty dollop of Barry Fitzgerald on high Irish alert as the ship’s maniacal cook.

It’s sort of a Mutiny on the Bounty meets Lifeboat, without the fury of the former or the charm of latter. And that’s probably why, despite the awesome cast, I found it hard to watch and ultimately disappointing. The plot twist that sees Captain Larsen go from headaches to blindness (is it a brain tumor? syphillis? do we care?) and yet still be a serious threat is more than a little groan-worthy, and the happy ending rings both false and inescapable.

Ultimately, I’m not sorry I saw it, but I can’t imagine I’ll take the voyage again.

3 thoughts on “The Sea Wolf: Cinema Shame for March”