I’m always looking for noirish films that address issues of gender and race, so when I was scrolling through “free to me” videos via cable, I was happy to find Hoodlum (1997), a picture I hadn’t seen and don’t even remember hearing about when it came out. This is easy to explain, given how little interest I had in crime or gangster pics back then. The films I remember liking best from that year are Austin Powers and Men in Black! I didn’t see LA Confidential or even Titanic when they came out. 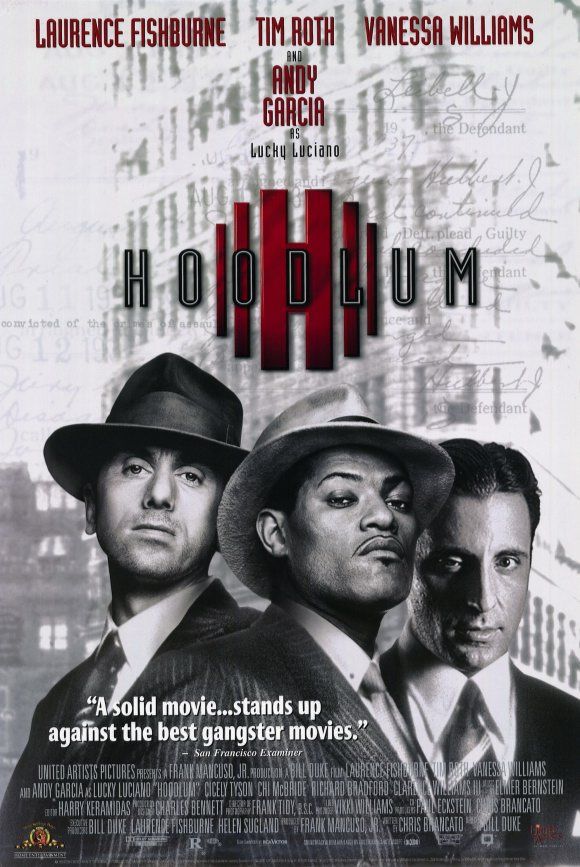 So, Hoodlum. Based on real gangsters and 1930s Harlem, it has the feeling of being entirely unreal, immersed in its own violent fairy tale like the Godfather franchise began and The Sopranos ran away with. Just look at the weak quote on the poster above: when “A solid movie…” is the best you can get? Oy vey. Frankly, I was shocked to find the picture had a $30M budget because it feels made-for-TV in its cinematography (e.g. a purposeless slow-motion throat cutting, the final scene zooming in on a closed eye that then turns pixelated as it fades to credits) and editing (I suspect many a cut, continuity is terrible, and in one scene you can see the tape holding down one of Andy Garcia’s eyelids). There’s also a fine line between era dialogue and camp, and the film steps over the line many times, so add writing to the weak column.

Acting within these limits varies from occasionally compelling to utter crap. Laurence Fishburne is always good, even when the writing isn’t. So I enjoyed watching him bring his character (Bumpy Johnson) to life. Andy Garcia did as subtle a turn as Lucky Luciano as such a larger-than-life character allows. And I enjoyed Chi McBride as Illinois Gordon very much, especially in his on-again-off-again love affair with Loretta Divine as Pigfoot Mary. The two had a superb dynamic, and McBride was compelling as Bumpy’s cousin and right-hand man. Also noteworthy were several supporting characters, including Paul Benjamin as Whispers. And unforgettable were real life brothers Beau and Mike Starr as brother hitmen; their big scene was thoroughly engaging, well acted and shot, with dark humor galore. It showed what this film could have been but wasn’t.

The worst of the film for me was Tim Roth chewing scenery or swallowing it whole as Dutch Schultz. He’s always an overactor, but this was ridiculous. Maybe I’ve just seen too much of him, but he enjoyed the accent and the swearing more than trying to convince anyone he was the character he was playing. And more disappointing than ridiculous was Cicely Tyson as “Madame Queen” St. Clair. Her French was bad and her renowned overbite literally interfered with my understanding when she spoke. More importantly,  she did not convey to me the power and menace needed to pull off the role. Oh, and I cringed at her costumes as well.

Vanessa Williams was a pointless bauble instead of a compelling character. She drew the eye but not the mind or heart as the beautiful do-gooder that ambitious Bumpy pursued and won by convincing this Christian charity worker that he was different from other gangsters. If he killed, it was to make the world better for black folks in Harlem. Her character was broadly telegraphed rather than developed, their courtship and relationship were given only token development (not even as much as Guys and Dolls), and when she finally leaves Bumpy, declaring him as bad as any other hoodlum, it feels random and unconvincing. Perhaps better editing would have made their relationship more compelling, but I doubt it.

Overall, Hoodlum had the necessary elements to tell its tale, but it treated them like the chess pieces we are told rather than truly shown that Bumpy uses so well rather than living, breathing individuals in a struggle over territory, economics, and race in Depression-era Harlem. What a waste.