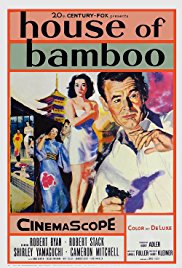 1950s noir varies wildly from profound to perfunctory to downright pitiful. As the post-WWII period became the Cold War era, noir focus shifted from the personal to the political, the ambiguous to the absolute, and from the antihero to the FBI. Of course, this overgeneralizes, and there were some great 50s noir flicks. Particularly interesting to observe is how the same director could helm pictures during this decade that illustrated both the best and the worst of noir style and content. Samuel Fuller is one such director.

In Fuller’s Pickup on South Street (1953), his protagonist is a sympathetic petty criminal (Richard Widmark) who rescues a seeming femme fatale who turns out to be a tough-talking good girl (Jean Peters), and spectators can mostly ignore the stupid Cold War “who’s got the microfilm?” plot. Then, watching House of Bamboo (1955), we may find ourselves cringing through more one-dimentional Cold War excess, but we aren’t rewarded with a complex or compelling leading couple. Our hero is a macho U.S. army investigator (Robert Stack) and his girl, Mariko, is a naive but plucky Japanese widow (Shirley Yamaguchi) who must play geisha (“kimono”) for the investigator to help him in his mission. We do get one classic flourish with the casting of Robert Ryan, playing a sociopathic criminal gangster with his usual flair.

The film’s Orientalism is its most cringeworthy facet for me. From the title font and the stereotypically “orientalized” soundtrack to the dubbing of the voice of former Hollywood hearthrob Sessue Hayakawa (as Inspector Kito) and the character of Mariko, we dwell in the Japan of the western imagination.

Most painful for me was Mariko’s loyal, self-sacrificing Madame Butterfly type character.  Although she speaks of her family honor, she devotes her life to white men. First, she stays devoted to the memory of her murdered white American husband, telling his “friend” (who turns out to be an army investigator) how like a perfect dream her marraige was, even though her husband told her she must never tell anyone they were married. Then she helps the investigator to bring down the syndicate, not hiding from danger even when she learnes she was betrayed by her husband,  who worked for the criminals all along. In this updated version of Puccini’s racist, sexist mess of an opera, however, Mariko need not sacrifice her life in shame, for she substitutes the former crooked white man for a good white army man.

For the noir lover, there are a few noteworthy elements of cinematography. I enjoyed the work with shooting within and around paper screens, and there is a definite “Look Ma, top of the world!” moment when fleeing villain Dawson hides among a group of children at an amusement park on a pier. He climbs to the top of a ride that looks like a planet with a ring that turns and shoots down at cops and the crowd. Eventually, our hero follows and shoots him dead, letting him lie over the rail, slowly circling. It’s a classic noir ending, although by 1955 it’s more derivative than shocking.

Praise for the film is best reserved for its place and time. The film shows a Japan in flux, moving from a postwar past into a westernized future. One of the most interesting scenes is in the titular “House of Bamboo” — a former royal home that Dawson has bought with his ill-gotten gains — where geisha types perform classic Japanese dance, then suddenly sluff their kimonos for western dress to boogie to swing music with the white American criminals they serve.

To my mind, the film would be far stronger in such commentary if it cared at all about the Japanese. Mariko is the only developed Japanese character, and you’ve already read my two cents about her. Hayakawa’s inspector might have been interesting if he’d actually had any real role or personal life/politics. Instead, the actor doesn’t even get to speak his own lines, however few they may be.

I haven’t fully decided how I feel about the fluent Japanese we hear spoken by many background characters that not a single one of the American characters can speak. Not a single gang member bothers to learn, nor is a single Japanese man allowed in the gang. Moreover, none of the Japanese spoken is translated — understandable in an era that wouldn’t risk the impact of subtitles on a popular audience, especially one that likely still saw the Japanese as the enemy. Watching the film, it offends me, but considering it critically, we can argue it shows the misuse of Japan that crooks like Dawson commit. If only the army weren’t just as xenophobic.

Perhaps I should just be grateful that Mariko wasn’t played by a white American actress, as so many Asian female characters have been throughout Hollywood history.