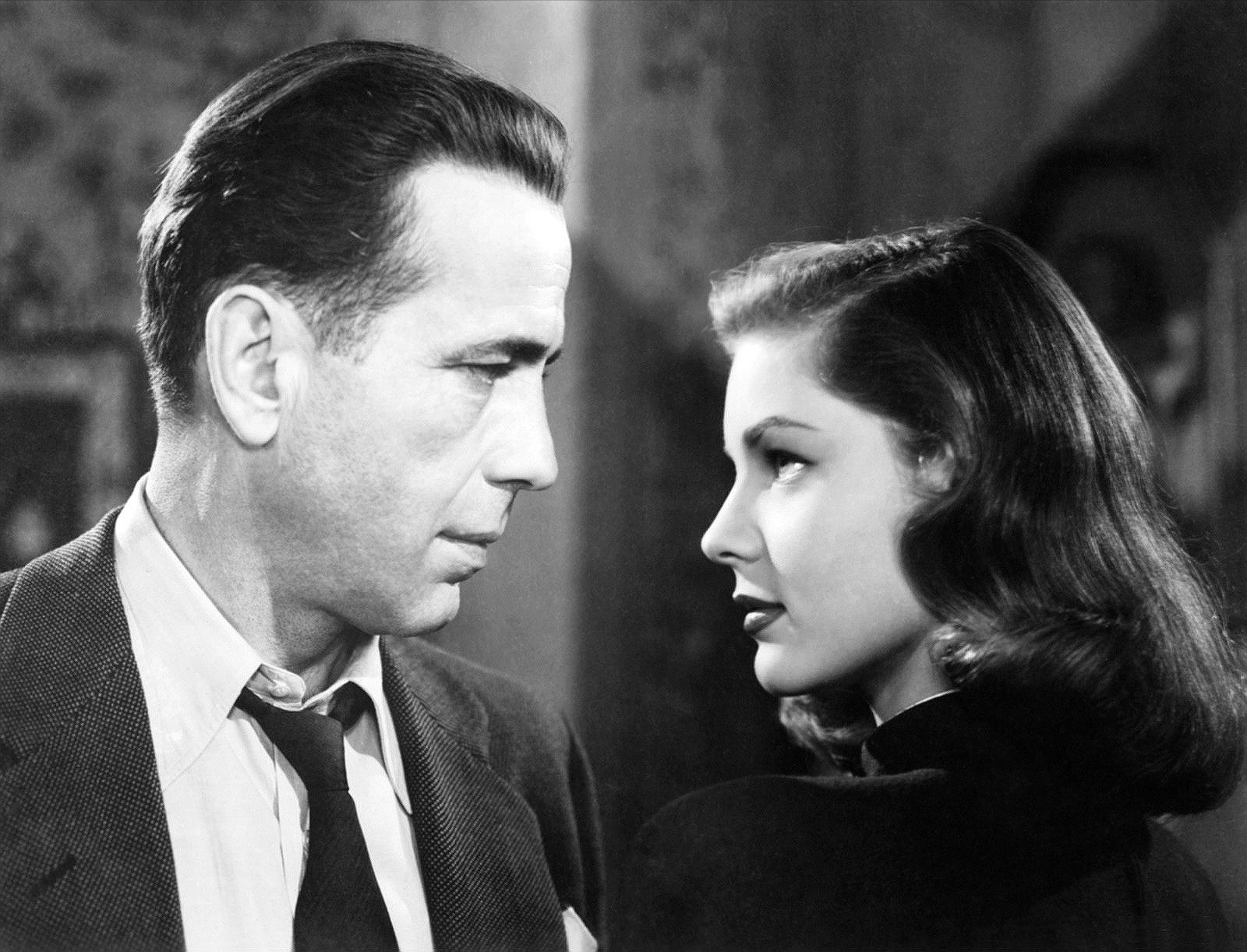 Once upon a time, I couldn’t stand “Bogie and Bacall.” I found Bogart overly gruff and distinctly unattractive. Back then, I was all about the 30s, favoring couples like Fred and Ginger and Grant and Hepburn in Holiday and The Philadelphia Story. Bacall hadn’t even hit my radar, and my own fiercely independent teen years had brought the end of a dating relationship with a guy 5 years older than me who called me “Baby.” Of course, there was also Bertie Higgins “Key Largo” song, incessantly on the radio in 1982, inspiring my then-BFF to blather on about how true it was, how perfect Bogie and Bacall were together. I kneejerked hard and got as far away as I could, even refusing to watch Casablanca or The Maltese Falcon because Bogart was in them. Over time, this silly bias became an afterthought, just a gap in my film knowledge as I continued to bask in 30s screwball comedies and delighted in Mel Brooks and early Woody Allen comedies. During college I became fascinated with film versions of Shakespeare. During graduate school, I delighted in feminist film theory and science fiction film and tv. Other film fetishes have come and gone since then, from anime to queer cinema.

Only very recently did I fall in love with classic noir. Films I had found so-so upon first screening (from Scarlet Street to Night of the Hunter) became sources of complex and powerful pleasure. I coupled my screenings of B public domain films and classics alike with readings in theory and history, read Chandler and Hammett, and started filling in those 40s film gaps…including Bogie and Bacall.

And this brings me to the focus and purpose of this post, MovieMovieBlogBlog’s “In Like a Lion, Out Like a Lamb” Blogathon.  We are to share a film that we approached with misgivings but turned out to love. Or, as Steve puts it, “you began with gruff expectations, only to have your heart melt by movie’s end.” For me, that gruff-to-melty film is Howard Hawks’ wild mess The Big Sleep (1946).

To clarify my “lion becomes lamb” experience, here are my top three grouchy objections and their happy resolutions:

In short, the noir atmosphere and Bogie-Bacall chemistry in the film bowled me over (though I give most of the credit to Bacall for the latter). I didn’t even care that Marlowe is supposed to be more enamored of Eddie Mars’ wife (aka “silver wig”) than of Bacall’s deceitful spoiled Vivian Rutledge (name changed for no reason I can see from the novel). Frankly, I loved how Bogart’s Marlowe loved and desired Bacall-as-Vivian…because I loved and desired her, too. Still do. All this and a great supporting cast: who has the energy to give a damn about plot holes?

From this lion-to-lamb experience, I watched and rewatched Key Largo and found similar pleasure. And I even went back to The Petrified Forest (about which I’ll be writing in April for The Good Old Days of Classic Hollywood’s Bette Davis Blogathon) to find Bogart endearing opposite Leslie Howard and Davis in his first tough guy role.

The rest, as they say, is (ongoing) history. I’m just glad I gave in and gave the Bogie-Bacall magic a try.

13 thoughts on “Bogie, Bacall, and The Big Sleep: In Like a Lion, Out Like a Lamb Blogathon”