Time flies, but how exciting to begin taking part in blogathons for the second year! For The Great Villain Blogathon 2015 (organized by Speakeasy, Silver Screenings, and Shadows and Satin), I happily wrote about a new obsession with the villain roles played by a young Richard Widmark.

This year, I’m going for something a bit more complex…and displeasing. My subject is Barbara Stanwyck, as an onscreen femme fatale and an offscreen reactionary. I recently learned about the political side of Stanwyck from an episode of the podcast You Must Remember This, entitled “The Strange Love of Barbara Stanwyck.” (I highly recommend every episode of this podcast; it’s amazing, well-presented backstory for the classic film fan.)

If you enjoy noir, you enjoy Barbara Stanwyck. They’re inseparable in many ways, for the actress played perhaps the most famous femme fatale in all of noir, Phyllis Dietrichson in Double Indemnity (1944): she of the anklet, the cheesy blonde wig, and the icy disposition. Two years later, Stanwyck played a more complex but equally lethal kind of evil in The Love of Martha Ivers (1946) as well as The File on Thelma Jordon (1950). One can even call her sexually charged “heroine” in the pre-Code comedy Baby Face (1933) a precursor to her later villainous roles.

Stanwyck would flesh out her many appearances in noir with roles both morally ambiguous and sympathetic, including discontented and ill-fated wives in The Two Mrs. Carrolls (1947), Sorry Wrong Number (1948),  Clash By Night (1952), and Witness to Murder (1954), a struggling single mother who takes on a dead woman’s identity in No Man of Her Own (1950), and a wife who promises a murderer anything if he’ll help save her husband’s life in Jeopardy (1953). Later in the 50s, she even plays an iron-fist rancher with femme fatale overtones in Samuel Fuller’s Western Forty Guns (1957).

There have been no films I can name in which I haven’t enjoyed Stanwyck — Ball of Fire (1941) is my favorite of all screwball comedies. But I especially enjoy Stanwyck playing villains, even when they’re comic, such as the emotional torment Jean/Eve puts Henry Fonda’s Charles “Hopsy” Pike through in The Lady Eve (1941). 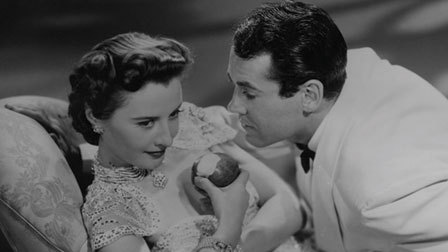 My love of Stanwyck, however, has recently been marred — or complicated in the messiest of ways, at least — by what I see in retrospect as her abominable politics. Teamed with her reactionary husband Robert Taylor (one of the only individuals in Hollywood to not only name names when called to testify before the House UnAmerican Activities Committee (HUAC) but to declare he wanted to see all those in Hollywood with communist sympathies “sent back to Russia”), Stanwyck was one of the most conservative women in Hollywood.

She opposed the presidency of FDR, holistically. She believed in the right wing “bootstraps” approach to success, for if she could overcome her difficult childhood, others should be able to do the same, without any assistance. She joined the Motion Picture Alliance for the Preservation of American Ideals (MPA) early, sharing its goals of monitoring Hollywood films to combat “subversive” methods and images. She publicly supported HUAC, testifying as a friendly witness.

Of course, it is easy to condemn her perspective in retrospect, especially because it seems Stanwyck was responding out of having been orphaned at the age of four and raised in foster homes, and her success in Hollywood led to her becoming the highest-paid woman in the US in 1944. Unhappy childhoods and massive wealth can make for a bad combination, especially when one then marries an even more reactionary man — or at least one more vocal about it.

Stanwyck was no more a villain during the era than other similarly conservative stars, including her co-stars Gary Cooper and Fred MacMurray, as well as women such as Ginger Rogers. Still, as we think about how blacklisting destroyed lives — and even helped to end them, as it seems in the case of noir great John Garfield — it behooves us to look, now and then, not only on screen but behind it as well.