What’s a gal who loves Mel Brooks but writes a film noir blog to do when Cinematic Frontier announces the 2016 Mel Brooks Blogathon? To quote the master:

I’ve chosen to write about High Anxiety (1977) for this blogathon because the picture is as close as I can get to noir within Brooks’ oeuvre. The light-hearted homage to Hitchcock features a fabulous cast, an amazing theme song, and some delightfully memorable moments. There are critics who call it a lesser effort and/or a failed satire, but Brooks never gets good reviews when he stars in his own films. (In fact, I saw an interview in which Gene Wilder stated that he wouldn’t star in Young Frankenstein unless Brooks agreed not to appear in it. I get the point, but how well did Wilder do without Brooks — not including Willy Wonka, which Wilder neither wrote nor directed)? But I digress.

I’d like to pay tribute to High Anxiety by applauding its cast and what I think of as its best moments, Hitchcockian and otherwise. So here’s my Top 5 Most Memorable Facets of High Anxiety:

While Frau Blucher will perhaps remain her signature Brooks character, the pointy-breasted, mustachioed Nurse Diesel is certainly worthy of applause. I adore her “no fruit cup” delivery and the sour look always on her evil face.

4. The duo of Leachman’s Diesel and Harvey Korman’s Montague

You can’t fully appreciate Diesel without her whiny bully of a lover Dr. Montague. Korman is underrated as a comedian, and he’s particularly hilarious as he tells Diesel she’s spanking him too hard and she reminds him how much he loves it.

3. Dr. Thorndike and the birds

Of course it’s a trite, obvious, immature spoof of Hitchcock’s truly creepy scene from The Birds (1963), but I love its potty humor. No one will ever call Brooks subtle, but as Zero Mostel’s Max Bialystock says in The Producers: “When you got it, baby, flaunt it!” So much is awesome about this scene, from the screeching of the bellboy (Barry Levinson) — “Here’s your paper! Here’s your paper!” — and the black ink from the newspaper running down the drain in homage to the black and white footage of blood from Psycho (1960) to Mel Brooks lying in the bathtub, not dead but traumatized, reminding himself there’s “Definitely no tip” for that bellboy.

1. Thorndike and Brisbane on the run: the airport scene

I just plain adore this scene. The idea that people ignore you if you’re loud and obnoxious is fantastic, and the old Jewish couple played by Brooks and the incredible Madeline Kahn is too delicious for words. She’s bringing celery on the plane in case her husband wants a Bloody Mary, and he’s arguing about whether a friend of theirs is dead or not and how he walked, complete with Yiddish sound effects. It’s possible you have to be Jewish to love this shtick as much as I do, and it’s nothing to do with Hitchcock, but it’s frankly my favorite bit from the film.

I know I’ve missed plenty of good bits, but that’s how a Top 5 rolls. Mostly, I just want to say thanks for the anxiety, Mel. You’re amazing. 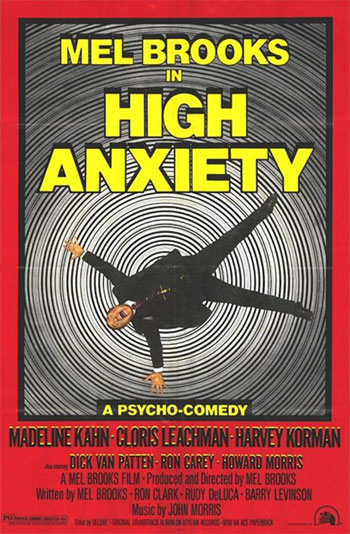