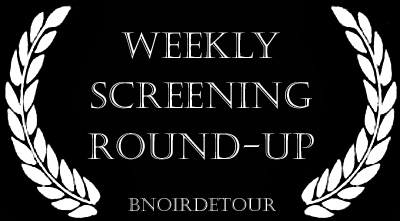 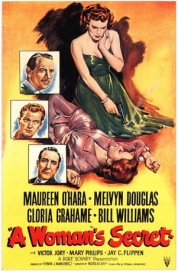 I’ve been remiss at covering all the films I’ve been screening lately — including some real gems and a dud or two. This post will help me do some catching up, and as a reward for your generosity in reading, all four films I will cover today will include YouTube links where you can watch them for yourselves! (All may sooner or later show up as #BNoirDetour live tweet fodder, but do indulge as the mood strikes.) In chronological order, then, here they are:

The Old Dark House (1932): James Whale offers a delightfully creepy and campy tale of five people caught in a storm who end up asking for shelter for the night within the walls of the titular old dark house and its spooky inhabitants. From fussy Horace (Ernest Thesiger, Whale’s flamboyantly gay friend who’d play Dr. Pretorius in the director’s Bride of Frankenstein three years later) to mute brute servant Morgan (Boris Karloff, grimacing and ogling Gloria Stuart’s Margaret until he has opportunity to attack her), the film offers a menagerie of household inhabitants that get weirder and weirder. Particularly fabulous is the camp queerness of it all, from the family’s surname “Femm” to Elspeth Dudgeon (credited as John Dudgeon) as family patriarch Sir Roderick. A surprisingly spunky Melvyn Douglas and an entertaining Charles Laughton add to the fun. I fault it only for how it slows down in the middle; nonetheless, this early Universal horror outing is HIGHLY RECOMMENDED.

The Brighton Strangler (1945): I’ve long had this on my to-see list, particularly because it is the precursor and obvious inspiration for George Cukor’s A Double Life (1947), a film I have devoted ample time to as a fan and academic. It’s absolutely delicious in its preposterousness, with John Loder going all out in his portrayal of an actor whose head injury during a London bombing makes him believe he actually is the character he’s been playing on stage, the “Brighton Strangler.” Don’t expect plausibility or depth, just enjoy. RECOMMENDED. (And thanks to Adam of the Attaboy Clarence podcast for putting the film online for us all to enjoy. A big “Canterbury” to you!)

A Woman’s Secret (1949): I was feeling magnanimous toward Melvyn Douglas after The Old Dark House, so I decided to give this not-very-thrilling not-very-noirish flick a try. Douglas is okay, while both Maureen O’Hara and Gloria Grahame are mostly annoying — the former whiny and mopey and the latter ditsy and floundering. The big crime of this film is not the shooting of Grahame’s character but the terrible script that leaves competent actors and director Nicholas Ray no way to shine. The dubbed singing voices add to the messiness. NOT RECOMMENDED, but just in case…

Vice Squad (1953): I’ll see any film with Edward G. Robinson in the lead (or any role, really), and this is one such film. It’s a day-in-the-life police procedural in which diverse cases spread and then condense into a violent climax featuring a wonderfully weasley Lee Van Cleef. Second-billed Paulette Goddard is also diverting as an escort service madame; one of several humorous touches interwoven with the more serious drama/action. RECOMMENDED.