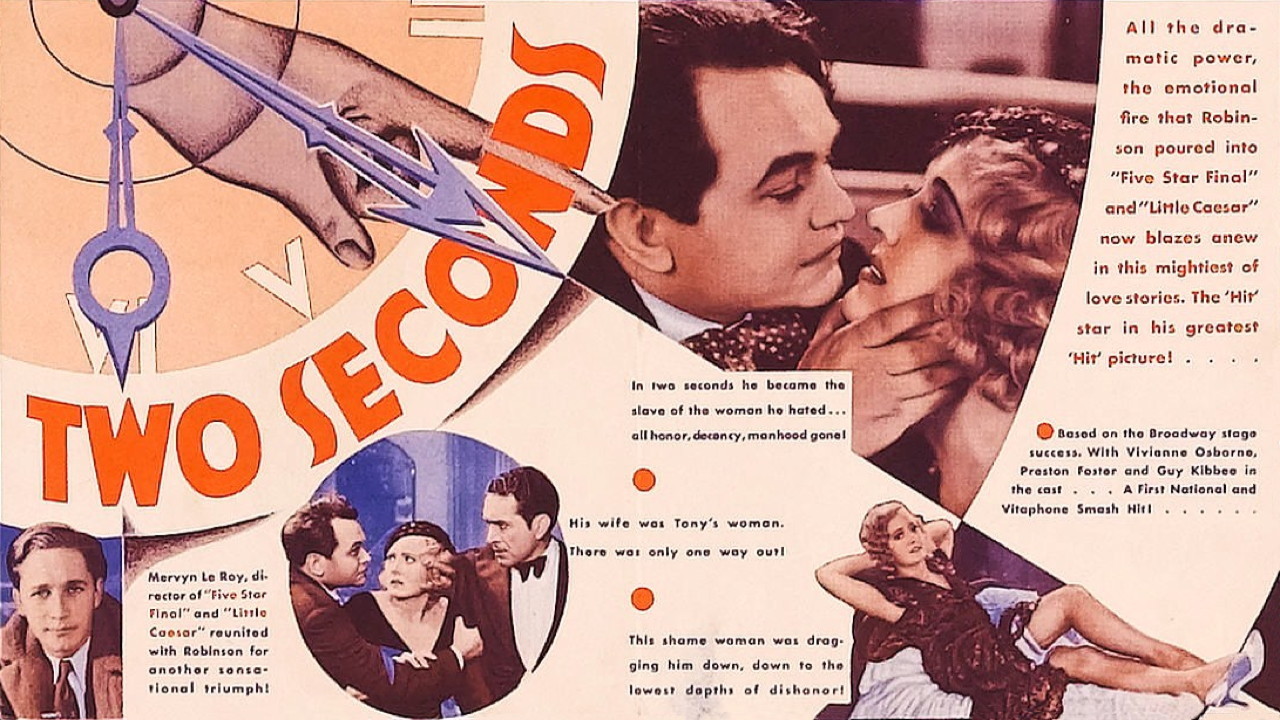 When I saw that Once Upon a Screen and CineMaven’s Essays from the Couch were teaming up to host a blogathon on the films of 1932 with the descriptor “Hot & Bothered,” I wanted in but had a hard time coming up with something that fit the noir focus of my blog. Then I discovered the film Two Seconds. And I’m so glad I did. 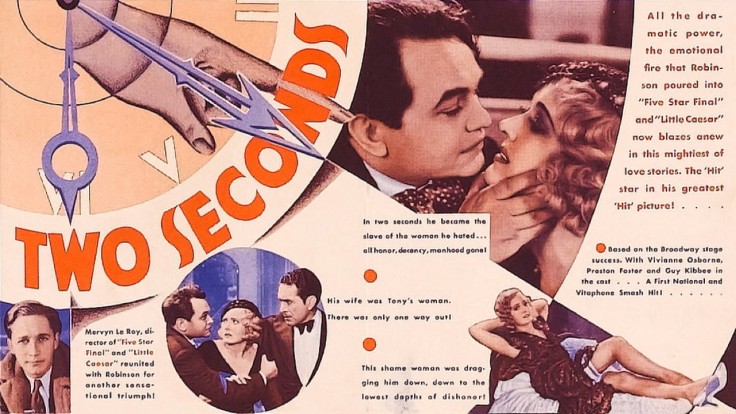 Two Seconds, directed by Mervyn LeRoy, stars Edward G. Robinson as working stiff John Allen — a quite different character than gangster Rico in Little Caesar (1931), helmed by LeRoy the previous year. John is a riveter living with his best pal Bud Clark (Preston Foster) and hoping someday to meet an educated gal to help him think more deeply and philosophically than the average riveter. But fate — in the form of a scheming vamp — turns his world upside-down and eventually lands him in the electric chair.

The film starts with a noirish opening, a small, windowless room in which sit a group of reporters and other interested individuals, waiting for the arrival of our protagonist, who has been condemned to the electric chair. The probing questions of a curious sociology student (whose teacher got him permission to attend the event!) bring us to the title: two seconds is the amount of time a brain will function after an individual has been electrocuted — enough time, we’re told, to relive one’s whole life, “the longest two seconds of his life.” The lever is thrown, and the film shifts to flashback, the life John relives that brought him to his terrible fate.

John and Bud appear on a high scaffolding, plying their riveter trade. John waxes naively philosophic, noting the difference between the way people look when they’re beside you and the tiny dots on the pavement below. If he ever gets hitched, he declares, it will be to a girl with education, to help him think more deeply: “Ain’t no use both of us being dumb.” Bud fixes him up on “another” double date alone with his steady girl Annie, even though John doesn’t want to go. Once he meets her, he’s even more certain. Bud has fixed him up once again with what he calls a “firetruck” (a fat, mouthy woman), so he takes off on his own. Though we’ll find him more sinned against than sinning by the end of the film, John’s lack of self-awareness does him in. His sexist perspectives on women betray his claim to value brains above all. If only he got a chance to grow up a little more before fate did him in…

John wanders into a taxi dance hall and pays his dime to dance with blonde cutie Shirley Day (Vivienne Osborne). Soon she’s being pawed by another lug and John plays hero, getting himself and Shirley thrown out in the process. To make it up to her, they go out for a late-night milkshake and Shirley sees she can play John a sucker from the first sip, identifying herself as a poor lonely girl with sick parents back in Idaho who values education as much as he does. Though Bud later calls him a fool for falling for a “dance hall dame,” John declares she is more than that and is obviously smitten.

Soon Shirley’s true colors as a low-class vamp show: she’s desperate for the legitimacy of marriage to show up her dance hall friends. A predecessor to the femme fatale, Shirley doesn’t aim very high, but then, she doesn’t plan to give up her trampy ways even when married. Luring him reluctantly from the lecture John invites her to, she takes him to a speakeasy. He complains but soon gets so drunk he doesn’t know where he is, even when Shirley drags him off to a justice of the peace, whom she bribes with $10 to marry them despite John’s inebriated state.

Back at the apartment, Shirley claims her right to kick Bud out of the apartment, at first playing the sweet little wife, but turning nasty when Bud calls her on her trickery and misuse of his friend.

John is determined to do right by Shirley, now that they are married. Shirley spends his money on clothes and does little to act the role of wife. This leads to a fight between John and Bud at work. John demands Bud say nothing negative about his wife, but Bud can’t help himself, someone needs to set John straight. John reaches out to punch Bud. Ducking out of the way, Bud falls from the high scaffolding to his death, crying out as John watches, helplessly. Sadness and guilt ruin John, who finds he cannot return to work or cope with his feelings. A doctor declares his illness psychological.

Soon, Shirley takes matters into her own hands. If John can’t work, she can. And her chosen method of money-making is in an affair with Tony (J. Carol Naish), the dance hall owner. Shirley makes no attempt to hide her lifestyle, and this only makes John feel more impotent than ever.

Again, the film stacks events to keep us sympathetic with John, even as we see that in his determination to remain married to Shirley as part of being a proper man lies much of his problem. When Shirley decides to bring Bud’s former girlfriend into the taxi dancing life, John finally snaps.He doesn’t kick Shirley out or go back to work, however. Instead, he bets on horses from the apartment he never leaves, and when he finally gets a winning combo, he takes the $172 Tony has given Shirley to pay him back and square himself. Playing by the rules has gotten John into the disaster his life has become, but he follows this path to the end.

Taking a gun, John goes to Tony’s dance hall, where he finds Shirley in Tony’s arms. He puts the money into Johns hands before turning on Shirley. “You made a rat out of me,” he declares, then adds, “Bud was right, you were born rotten.” Shirley appeals to Tony to save her, screaming that John is going to kill her. Tony does not act as John states, “Yeah, I’m going to kill you. If I don’t you’re going to go on like this, from Tony to another man, always making yourself cheaper and dirtier.”

Finally, we see the trial, in which John, more mentally lost than ever, attempts to explain to the court why giving him the death penalty isn’t fair at this point. He insists he is a man now, that he has “squared” everything, honoring his debt to Tony and dispatching the worthless woman who ruined his life. While he wallowed in guilt and self-pity, he wasn’t a man but a rat, and that’s when he deserved to die, if ever. He’d even have thanked the judge for killing him then. Ineffectively, he pleads, “It isn’t fair to let a rat live and kill a man!” He feels the “fever” of illness again, then finally calms and tells Bud to wait for him, that he’s coming. The speech is truly riveting.

The film’s last moment returns us to the death chamber through the hum of the electricity. Our final shot is a close-up of the sweating, traumatized face of the sociology student.

Two Seconds is a powerful proto-noir, featuring the tone, plot, character types, and themes we’d come to see at the height of the war-era. There is the urban underworld setting in the dance hall with its sleazy pimp-like manager and trampy/vampy women. There is the looming presence of death and the poignant use of a framing device (the death chamber) and flashback. And there is the femme fatale who makes a sap out of the everyman, a role Joan Bennett would play opposite Robinson in both Scarlet Street (1945) and The Woman in the Window (1944). It’s a fantastic chance to see young Robinson at his best, especially in his last scene, and to witness the vamp character that would a decade later become the even tougher and more ruthless femme fatale.

Ultimately, as befits this blogathon, Two Seconds centers on the theme of foolish men who find themselves too easily “hot & bothered” in the face of predatory female sexuality. It is this theme, however sexist, in many an early 1930s film, that led to the studios’ creation of the Motion Picture Code to reassure America that Hollywood wasn’t just a den of vice and sleaze.

I recommend the film highly.  SORRY, SITE IS DOWN. 😦 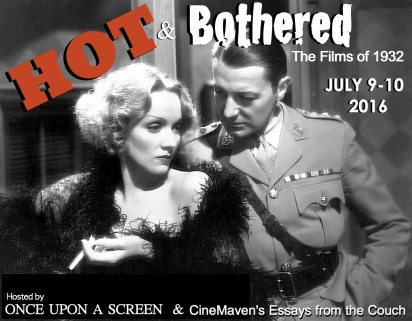